‘Banning them is a red herring’: Why election candidates are standing over their use of posters There have been increasing calls from the public to stop the use of posters during elections.

IT’S LESS THAN a month until this year’s local and European elections take place, with voters beginning to familiarise themselves with candidates ahead of both votes on 24 May.

From midnight on Wednesday (or in some cases beforehand), posters bearing the faces of would-be councillors and MEPs began to adorn lampposts across the country as candidates started to vie for attention from voters.

But with the advent of new technology to reach voters and the growth of a more environmentally conscious public, there have been calls for the use of posters to be discontinued.

Last year, a survey by Claire Byrne Live/Amárach Research showed that 77% of Irish people thought the use of posters during election campaigns should be scrapped.

And earlier this week, a local Tidy Towns group in south Dublin made headlines after sending an email saying that all posters erected in the area would be “removed & destroyed ASAP” (although the group later claimed the wording of the email was incorrect).

So have election posters had their day?

“They let people know that there’s an election happening, and they introduce the idea of politics and participation into society.

“They let people start conversations about what elections or referendums are about.”

Suiter points to research by Dr Theresa Reidy from University College Cork which shows that election posters increase turnout during elections and assist voters in their decision-making.

The research also shows that posters help the public recognise who they’re voting for, which is especially important for first-time candidates.

“Posters are a really good way for new candidates to get their faces known,” Suiter says.

“If you don’t have posters, you hand an advantage to incumbents who’ve had their seats for years, and who may have spent that time making appearances in the media.”

For independent councillor Mannix Flynn, who is running for Dublin City Council again this year, the leveling of the playing field is especially important.

He is against a proposed ban on the use of election posters, something he calls “a red herring”, because he says doing so would give undue advantage to political parties.

“The powers that be in the big parties can buy advertising, which leaves others at a complete disadvantage,” he says.

“They can afford to pay for billboards, advertisements at bus stops, and so on, so I think that posters give people and constituents a chance.” 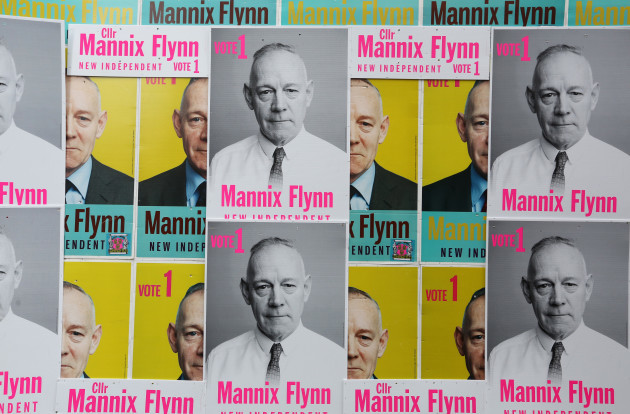 Posters belonging to independent councillor Mannix Flynn, which have been recycled this year, from 2014.Source: Sam Boal/Rollingnews.ie

Statistics from last year’s referendum on the Eighth Amendment appear to support Flynn’s point about the importance of public spaces in decision-making.

Exit polls showed that around 10% of voters – more than 200,000 people – specifically mentioned that posters were a factor in their decision making.

Flynn, who is re-using his old posters for this year’s campaign, also says that candidates are heavily scrutinised by local authorities to ensure that their posters don’t end up in a landfill or dumped elsewhere.

For him, the exposure offered by posters is balanced by the onus on candidates to ensure that they use and dispose of them correctly.

“I don’t believe the posters are the big villains they’re making them out to be,” he says.

“We have a lawful right to put up a poster, and we should continue to have that right.”

But from an environmental standpoint, the lifetime of a poster is a lot longer than that of a candidate, nevermind the length of their term in office.

The majority of election posters are made from corrugated plastic, a single-use material that can take over 400 years to biodegrade.

While Flynn tells TheJournal.ie that his posters are re-used and sometimes recycled into objects like flower pots, others believe there are more environmentally friendly ways to canvas votes from the public.

Donegal councillor Seamus Maguire – who set up the website PosterFree.is – one of those who is seeking re-election to his local authority by foregoing the use of posters altogether.

“It’s an antiquated form of communication,” he says. “A huge proportion of the council’s annual budget goes on littering, but when it comes to actually making a difference every five years, councillors don’t do anything.” 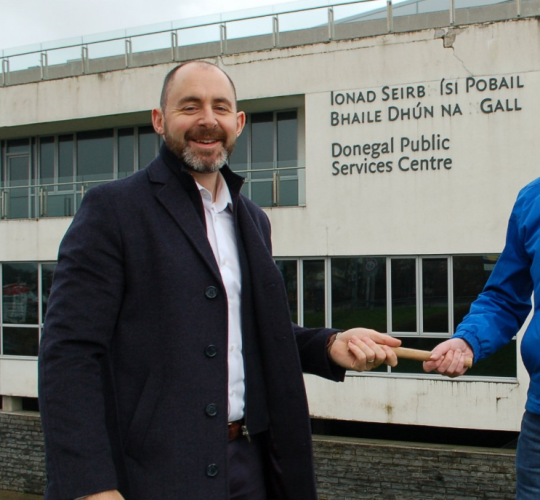 He describes how locals in his area are tired of looking at posters and cleaning up cable ties and other forms of litter after elections.

Instead, Maguire plans to canvas by using traditional methods such as leaflets and door-to-door visits, as well as less conventional means, like using a stencil to power-wash his message on to public pavements.

“I teach pupils and I tell them to think outside the box,” he says.

“I’ve a responsibility to show them that I’m doing it too. We didn’t have posters at the foundation of the state, so sometimes you’ve got to break new ground.”

But even for environmentally conscious parties and candidates, posters are a necessary evil in the run up to an election.

The Green Party, for example, introduced an amendment to the Seanad in March to try to limit posters to designated areas managed by local authorities.

The amendment was ruled out of order, and the party was among those whose posters were visible across the country after midnight on Wednesday.

However, a spokesman outlined why the party felt it was still important to use them.

“One study shows a correlation between using a high number of posters and being successful in the election. This is backed up by the experience of many candidates.” 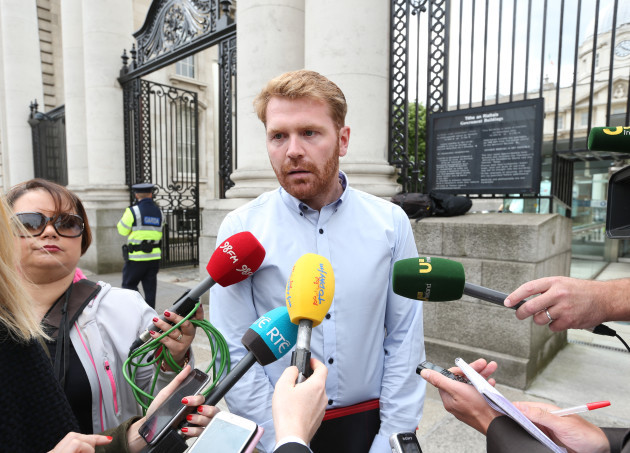 Social Democrats councillor Gary Gannon is running for European Parliament in the Dublin constituency, and recently said climate leadership was “the biggest challenge for our generation”.

But while he describes posters as “an absolute nightmare”, he says he feels he has to use them to get his message out to the public.

“I wish I wasn’t using them, but I’ve spent six weeks going door-to-door canvassing, and a lot times, people aren’t even aware that there’s an election on,” he tells TheJournal.ie.

“I know we’re in an age that you can get your message out on social media, but that’s still not as effective: the Irish electorate aren’t ready for that sort of campaigning.”

Ultimately, the ends will likely justify the means for candidates across the country.

It appears that despite public concerns, election posters are here to stay for now.

Stacey Dooley Investigates: Are your clothes wrecking the planet?