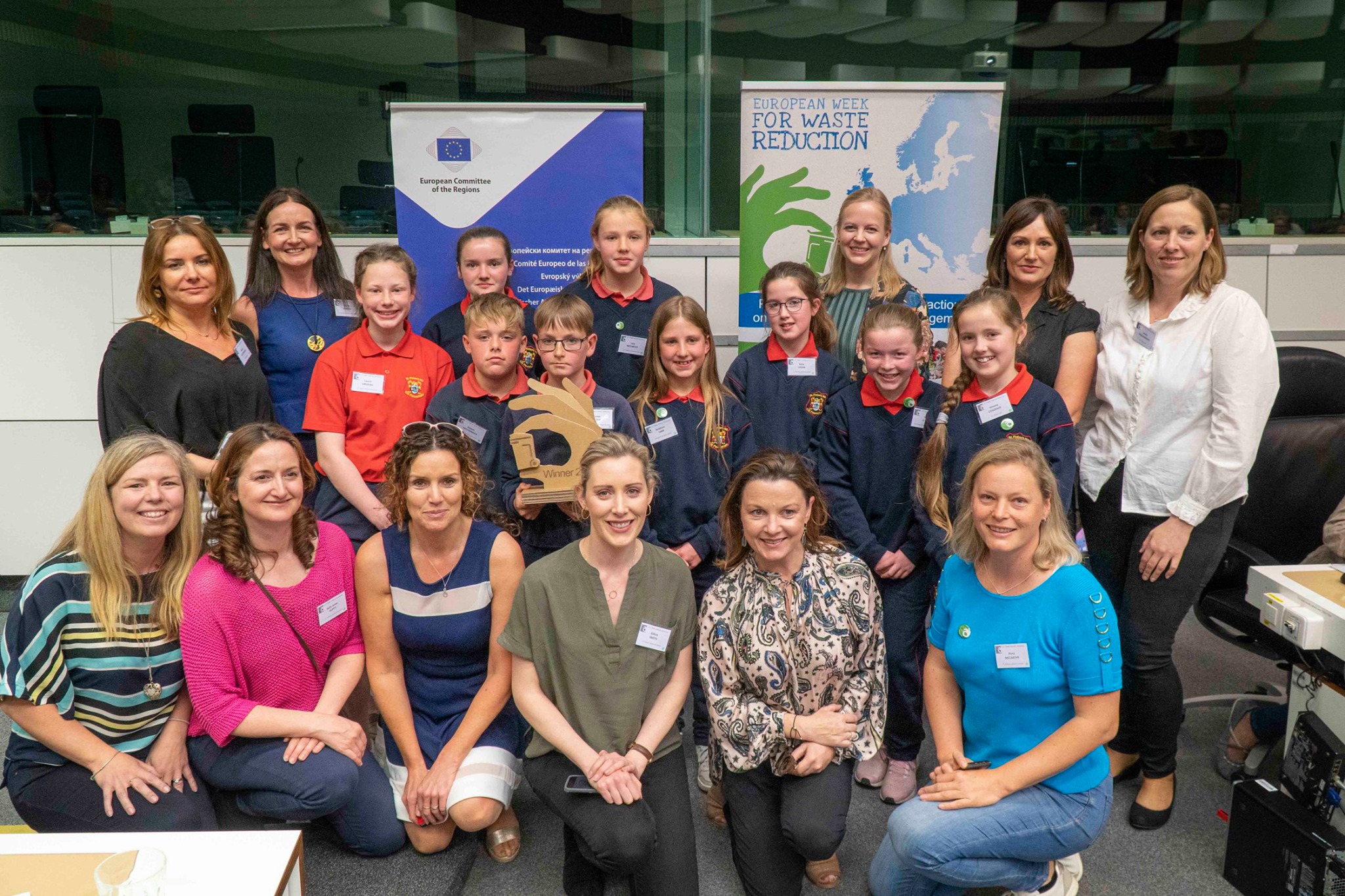 The EWWR Awards Ceremony took place on 15 May 2019, during the EU Green Week, at the European Committee of the Regions in Brussels, where our honoured Jury revealed the names of the most outstanding awareness-raising actions implemented during the EWWR 2018. Last year's main theme was Reuse and Ireland produced a winner, The Conscious Cup Campaign for an action taken to help reduce the usage of single use cups and we are delighted that once again we have produced a winning action which shows that we are helping to lead the way in waste prevention. Daniel Calleja Crespo, the Director General for the Environment at the European Commission, Iain Gulland, CEO of Zero Waste Scotland and President of ACR+ and André van de Nadort, member of the European Committee of the Regions and mayor of the Westellingwerf Municipality in the Netherlands opened the ceremony and welcomed the participants to this great EWWR celebration.

Six winners were selected during the event, one in each of the following categories:

The winners and finalists received their awards and certificates from the honoured Jury amidst rounds of applause. The event was attended by more than 150, which included a significant number of youths [most of them from Ireland], ensured that the atmosphere remained upbeat throughout the ceremony. In 2018 14,347 actions were registered from all over Europe, from these 16 finalists we pre-selected and these were invited to the ceremony. At the ceremony 6 winners were announced, they are:

Public administration and organisation; Zero-waste marathon. Sustainable school meals, implemented by the municipality of Sant Vicenç de Castellet (Catalonia, Spain) the mainstay of this action, which included a series of events, was a campaign to promote sustainable and healthy school meals among the three public schools in the municipality. Some 600 students and their parents were involved.

Association/NGO; the Cloughmills library of things. This organiser put a different spin on the concept of library: by lending out hardware instead of books, the team sought to build the capacity of the local community to perform chores locally and to reduce waste by eschewing the need for residents to purchase the items themselves.

Business/Industry; Emerging pollutants. Implemented by the IMQ Zorrotzaurre Clinic (Basque Country, Spain) in an effort to mitigate its environmental impact, this clinic classified the chemicals in the products used in four of its departments based on their effect on the environment. The next step is to substitute the most harmful ones with more sustainable alternatives, where possible.

Educational establishment EWWR Green Cleaning. Implemented by St Fintan’s National School (Ireland) Some 180 students from this school, together with their parents, participated in workshops to learn how to make cleaning products and toiletries that were free of hazardous chemicals. The European Special Prize; EWWR Sustainable Art Alphabet. Implemented by Col-legi Sant Josep (Catalonia, Spain) and its partner schools Part of an eTwinning project, this initiative encouraged students to learn about sustainability while honing their team working and foreign language skills. The result was an alphabet, the letters of which correspond to meaningful messages about the environment and waste reduction.

The EWWR – A key event in waste management

In 2018, the number of actions carried out as part of the EWWR reached a record of 14,347. They were registered via 32 national, regional and local coordinators in 30 countries and in cooperation with the EWWR Secretariat. Since 2009, the EWWR’s network of public authorities and stakeholders has been growing and showing their commitment and interest in the field of waste prevention. At its 10th edition, the EWWR put an emphasis on the topic of Hazardous Waste under the slogan “Time to Detox!” and many action developers embraced this theme. It drew the public’s attention to the often hidden, but harmful substances encountered in everyday products and activities. We are now looking forward to the next EWWR edition between 16 to 24 November 2019, which will focus waste education and communication. We warmly invite you to join the EWWR in your region and become an action developer yourself.

For more information on how to get involved in 2019 get in contact with the Eastern Midlands Regional Waste Management Office emwr@dublincity.ie

Who knows, you may become the next EWWR winner, let’s make it a hat trick for Ireland!