The village of Okere Mom-Kok was in ruins by the end of more than a decade of war in northern Uganda.

Now, just outside Ojok Okello’s living-room door, final-year pupils at the early childhood centre are noisily breaking for recess and a market is clattering into life, as is the local craft brewery, as what has become Okere City begins a new day.

“I think what I’m doing here is radical,” says Okello, who is behind an ambitious project to transform the destroyed village of 4,000 people into a thriving and sustainable town.

Okere City began in January 2019. Its 200 hectares (500 acres) feature a school, a health clinic, a village bank and a community hall that also serves as a cinema, a church and a nightclub.

Electricity is available to all, generated from solar energy – a rarity in the region – and far from the many outbreaks of cholera which were rampant years ago, there is now clean water from a borehole.

Pupils at the school pay half their fees in cash, and the rest in maize, beans, sugar and firewood. The clinic lets people pay their bills in instalments. The local security man wields a spear, an unusual sight in an area where many men idle around as women shoulder most of the paid and unpaid work. 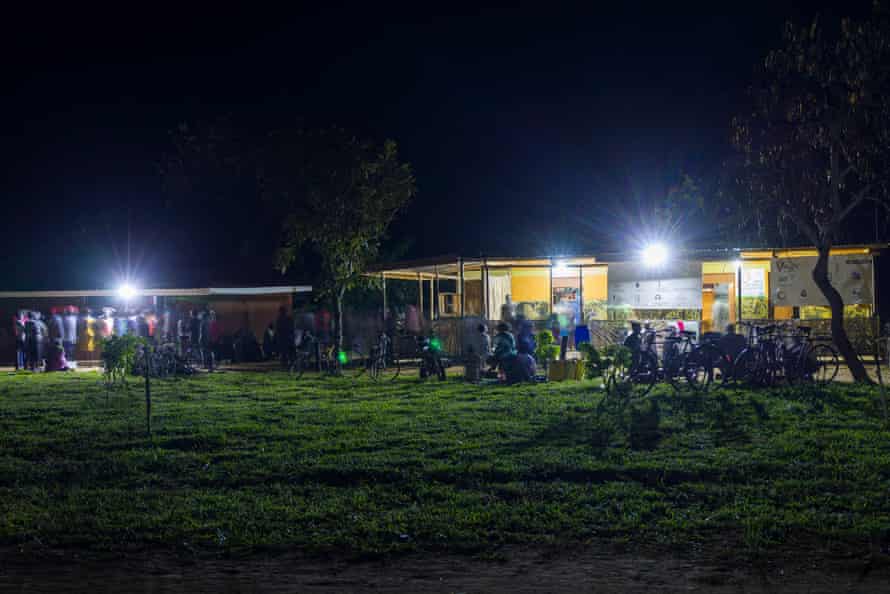 Solar power keeps the lights on for everyone in Okere City. Photograph: Katumba Badru Sultan/The Guardian

Okello is funding the project from his own pocket. Last year, it cost 200 million Ugandan shillings (about £39,000). The London School of Economics graduate and development expert had worked for several international charities and NGOs but grew disillusioned seeing projects fail because, he says, communities were not involved in decisions about their own future.

When he returned a few years ago to Okere Mom-Kok, hoping to meet extended family in the village he had left as a baby when his civil servant father was killed in the bush wars of the 1980s, he decided to put what he had learned into action. He wanted to create a project that was truly led by the people who lived there.

Okere now generates revenue. Every project, from the school to the local bar, can fund itself, something that has been possible because the project is being built not as a charity, but as a social enterprise, Okello says.

“I don’t want this project to be at the mercy of some white people,” he says. “I want us to have business conversations with partners. I want us to be responsible for shaping the destiny and the future of the project.” 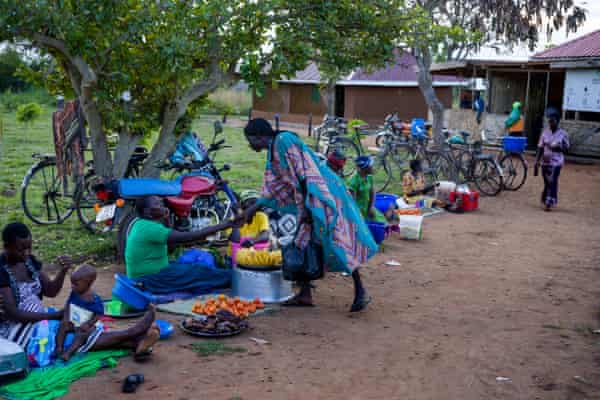 Translated from Lango, Okere Mom-Kok means, “a baby should not cry” and the logo for the project has a smiling baby’s face. But Okello quips that building the town has been far from all smiles.

While comparisons could be made to Akon City, the futuristic smart city with its own currency being built by R&B star Akon in Senegal, Okere is, in essence, the opposite, according to Amina Yasin, an expert in city planning, who works in Vancouver, Canada.

“Akon City is going to be a walled city for the wealthy,” she says. “It sounds like a capitalist endeavour on the African continent. It is to benefit mostly non-indigenous Africans, unfortunately.”

Okere City will pioneer green energy, but its unique selling point is its shea trees. Okello says the inspiration came to him via the Marvel blockbuster movie Black Panther, as he sat under a shea tree outside his house one afternoon in early 2020.

“I looked at [the shea tree] and realised that we have this important natural resource and we were not harnessing it,” Okello says. “And I thought about Wakanda and Black Panther, they had vibranium, this shea tree could be our vibranium.” 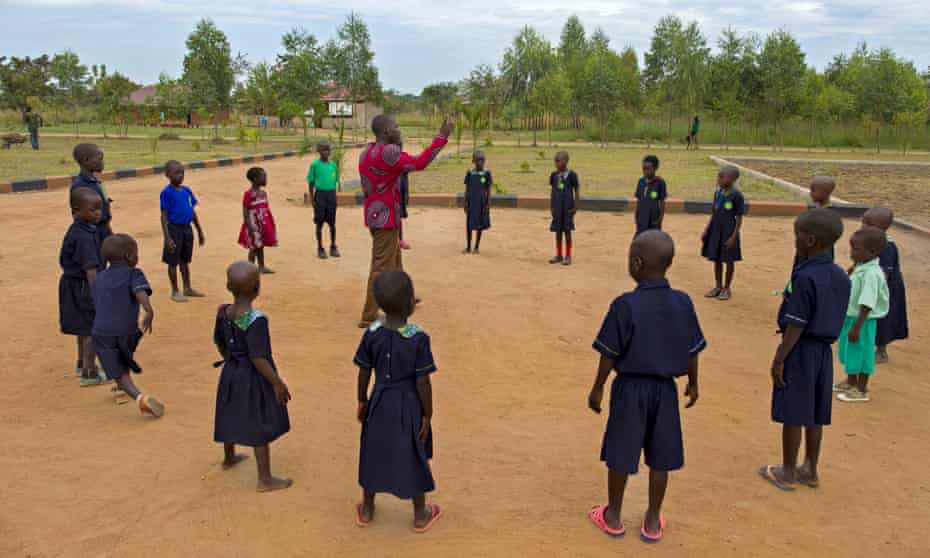 Outdoor lessons for Okere City’s schoolchildren. Children pay half their fees in cash and the rest in produce such as maize and sugar. Photograph: Katumba Badru Sultan/The Guardian

“So I am like: ‘Damn, I’m going to invest everything within my means to tap this resource, to protect [it], and to use it to emancipate my community.”

In August, Okere Shea Butter arrived on the market. The whole city smells of shea butter, and Okello has advocated for the protection and regeneration of shea trees, classed as an endangered species threatened by extinction.

Once a week an investment club meets in the community hall. As the sun starts to set over the city, the members assemble in a circle. The majority of the more than 100 members are women, mostly farmers, but some also run small businesses.

“I got a loan from the club to buy shea seeds, which I sold at a profit,” says member Acen Olga. 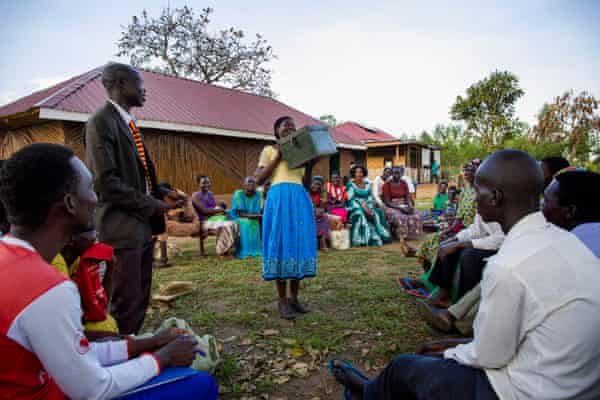 Members’ financial contributions are carefully recorded before being redistributed as loans to members who need them. When borrowers repay the loan, the cycle continues.

This style of banking is particularly important because it’s original to Africans, Yasin says.

“The way in which indigenous continental Africans have thought about money has always been outside of the central banking system,” she says. “It’s been about community and caring for each other, and patience, and long-term investments.

“We’ve always known a lot earlier than the western world and other, quote, unquote, developed nations, that money was out of fashion and it was not a sustainable way to live.” 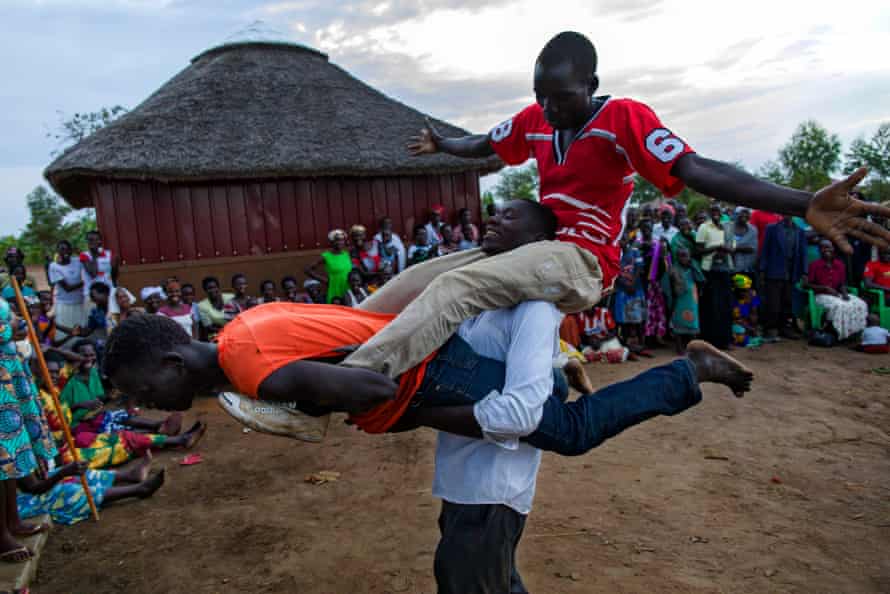 Just metres from the club, past the community clinic, the supermarket is buzzing, and laughter can be heard from customers in the pub attached.

Before the supermarket opened, villagers had to walk five miles (8km) for supplies.

“There’s a lot of improvement,” says Wilfred Omodo, 25, who has joined Okere City kickboxing team, which was set up in November. “We have more buildings now and even the people are increasing.”

Omodo started boxing while he was in a camp for people displaced by fighting in the region in the late 1990s and early 2000s. He is one of about 80 members of Okere’s boxing team, most of whom took up the sport for self-defence during the conflict.

Among them is 40-year-old Nickson Akaca who coordinates the team. He is equally inspired by the progress of the project so far.

“This place was basically a wilderness; there was nothing here,” he says. “And within a very short period of time, there has been a lot of change and progress. It gives us hope that maybe our passion to do kickboxing will not just go to waste.”

But rural to urban development projects only work if they are created by and include the communities they are working to serve, says Yasin.

“Okere City is being intentionally developed with the community in mind,” she says. “Whereas what we often see in cities across the world that do something similar is individuals who are kind of running away from larger cities and settling in smaller communities that they aren’t from.” 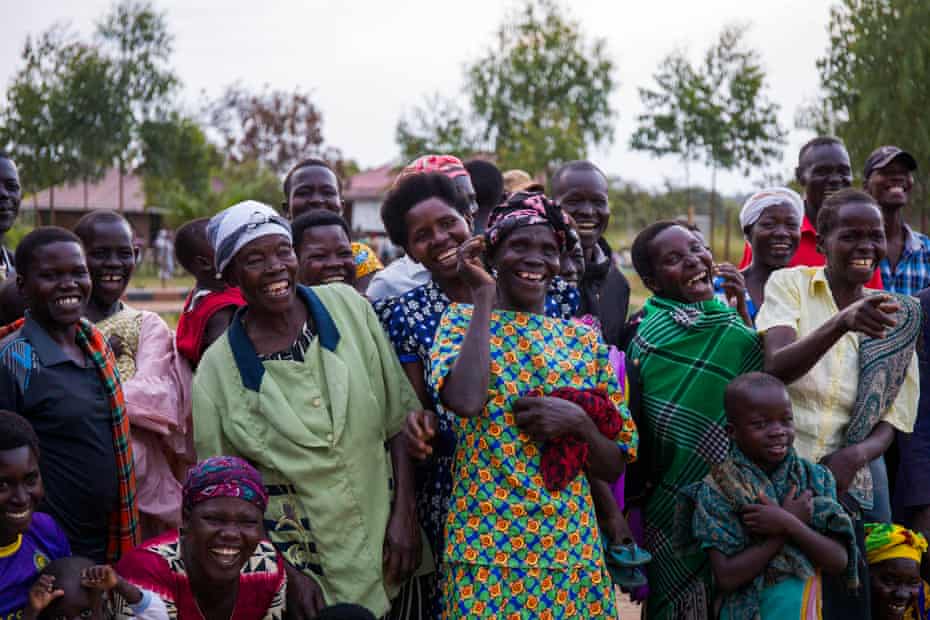 “What does it look like when these utopian cities become gated cities?” Yasin asks. “Not gated communities any more, not gated neighbourhoods, but gated cities surrounded by smaller local, poorer, indigenous villages.”

As night falls, the final whistle blows at the football match that had been showing on the big screen in Okere’s community hall and the room is transformed into a social club, with dancing and a small bar.

Tomorrow morning, the same room will serve as a church. ELV Online is Blueprint for Success for ELVES